First off, I was considered “high risk” during my pregnancy due to 1. being a Type 1 Diabetic and 2. having Hyperemesis Graviderium (Also referred to as HG-which is classified as having SEVERE nausea, resulting in weight loss, dehydration, malnutrition, and many other health complications). Because of that, I was going to the hospital 3 times a week to monitor my blood pressure and check on the baby starting at 35 weeks.

My official due date was January 1st, 2020 but I was planning on getting induced on December 23rd (most doctors will induce Diabetics at around 39 weeks as babies are already considered “term”). By the time December rolled around, I literally could not believe that I had made it. There were times I thought I would never see the day and to hit that 9 month mark, knowing that if my baby was born at any moment she would likely be totally fine, was the biggest sigh of relief I have ever felt.

December 11th, 2019. I went to the hospital for my tri-weekly checkup. I had just got back from being in Palm Springs all week, and then 2 holiday parties that weekend. I was experiencing a lot of rib pain and swelling which I wasn’t sure if it was because of those acitives, or something more serious. One of the biggest complications in Diabetic pregnancies is Preeclampsia. Preeclampsia is characterized by high blood pressure (hence why I was being monitored so frequently) and signs of damage to other organs such as the kidneys (excessive swelling can be an indicator).

They took my blood pressure and it was high. The first time it had ever been high my entire pregnancy. Soon after, another doctor came in the room and said, “Because you are 37 weeks today (considered “term”, early term, but still term) we feel the safest thing is to induce you earlier than planned. Preeclampsia can develop suddenly and result in serious fatal complications”. I felt time stop for a split second in that moment. “It’s ultimately your decision but our recommendation is to induce you today”. TODAY!? I can’t even begin to tell you the shock of someone saying, “are you ready to meet your baby today”? When you have been waiting 9 months and totally caught off guard. I called my husband immediately and told him to meet me at home, pack our bags and let’s do this thing!

We showed back up to the hospital at 8:00pm. I was immediately hooked up to monitors, IVs, and whatever else they do while you are in labor. They started by giving me some sort of medication to soften my cervix. Because my due date was 3 weeks away, I was showing no signs of early labor. Then after that they did 2 things (honestly can’t remember which one came first). One was inserting a Foley Bulb. It’s basically like a little balloon they put in your cervix and slowly tug at it every couple hours to try and manually dilate you. For those of you wondering, no it doesn’t hurt it’s just very awkward and uncomfortable feeling.

December 12th, 2019. After the Foley Bulb came out and I was hooked up to Pitocin (drug used to speed up labor) I finally hit 5cm dilated (you need to be at 10cm to push). How was it 24 hours later and I had only dilated to a 5!? I was a little discouraged and starting to feel pain during the contractions. Not intense pain, just like really bad cramping. The doctors asked if I wanted an epidural. I easily could have gone longer without it but honestly, what’s the point?! I mean god bless those who make it all the way without one but I wanted to be as comfortable and relaxed as possible. Getting the epidural was more painful than the contractions but it was over before I knew it. I had heard so many horror stories about the epidural I had totally psyched myself out for nothing! From that point on, I was pain free the entire time I labored.

December 13th, 2019. 30 hours later and still at a 5…My OB arrived at the hospital (that’s when things finally started feeling real) and she had told me that it didn’t look promising to have a vaginal birth as my body was just not dilating to where it needed to be in order to push a baby out. I was DETERMINED to keep going. I mean I didn’t just labor for 30 hours (even though it wasn’t that bad) only to have a c-section. But that’s the thing with birth plans, you might as well just throw that thing out the window because at the end of the day, you have NO CONTROL. Birth plans just create unnecessary anxiety and expectations and at the end of the day, the baby is coming out no matter what, but how is something we can’t always predict.

I remained extremely calm throughout the entire labor process, looking back I don’t think it had registered just yet that I was finally hours away from holding my sweet baby for the first time. I was casually chatting away with my mom, husband, and in-laws when all of a sudden 8 (I kid you not) doctors and nurses came running in. “Flip her over!” “Deep Breaths!” “Everyone back up!” They put an oxygen mask on my face, propped me up on all fours, and then manually grabbed my stomach and started trying to turn my baby in my belly. Before I could even ask what was happening they started yelling “PREP THE OR IMMEDIATELY, BABY’S HEART RATE DROPPED”. I started bursting out in tears, “what is happening!?”. This was the first time I had felt sheer panic take over my body like that.

They started rolling my bed back to the Operating Room and I could hear them calling for help over the speakers. Tears streamed down my face and I can mentally recall this moment more clear than any other memory. There was so much chaos when I got back to the OR. They started pushing on my body asking if I could feel any pain. I couldn’t, thank god because there was no time to give me anymore pain meds.I told them “Please wait for my husband!!!!!” My doctor told me, “There is no time. We have to get your baby out NOW.” The tears started flooding down again as I was completely alone laying on a table in an operating room, praying my baby would be OK.

I started throwing up. I don’t know if it was out of fear or anxiety but some angel of a nurse came up by face and held my hand while they began to cut me open. It was such a weird feeling. I could feel them moving my organs around and the most intense pressure you could imagine (but no pain). There was a lot of silence. It felt like 30 minutes but I’m sure it was only a couple. “Call it, 11:36 AM”. I ripped my oxygen mask off my face immediately. “Call what!?” Silence. “ IS MY BABY OK!?!” I was waiting to hear a cry but there was nothing. “Please put your mask back on, we are working on the baby”. I feel horrible saying this out loud, but in that moment I couldn’t help but think she hadn’t made it. I had seen and watched births and knew the baby was supposed to cry. They were so supposed to hold up the baby over the curtain and show her to me. My husband was supposed to be in the room telling me everything was OK…there was none of that.

At some point after she was born they had brought my husband in. I can’t even imagine what he was feeling seeing his wife get abruptly wheeled away and then having nurses tell him there wasn’t time for him to scrub in to watch his daughter being born. After that he walked over to me with MY BABY GIRL! He held her up to my face so I could see her and told me she was absolutely perfect. Apparently her heart rate had dropped so low in those few minutes before they got her out, that it took her a little while to adjust. Our doctor ended up telling us she didn’t know until a couple minutes after she was out, if she was OK or not.

After I was all stitched up (cringing thinking about that) they let me hold my baby for the first time. I cannot even begin to explain this feeling to you. This has to be the most incredible moment a woman will ever feel in her entire life. I heard people talk about it before but it’s one of those things that you have to experience first hand to be able to relate. The past becomes a distant memory in an instant and everything you’ve gone through beforehand simply doesn’t matter anymore.

I wish I could bottle up that feeling and take it with me forever. I would go through the hell I endured for 9 months for the rest of my life in order to have my baby girl here in the world safe and sound. Scarlett Jamison Stomel. 6lbs, 7oz and THE. BEST. THING. THAT’S. EVER. HAPPENED. TO. ME. 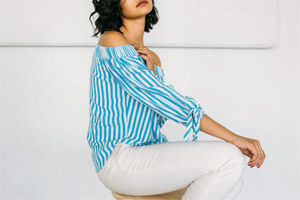 Made with in Seattle.